We are happy to announce that a new and improved version of our website is now live. It has been designed with a fresh new look and user-friendly navigation, updated with the latest information about our service.

Being the longest established NIE Number procurement service in Spain, we realised that our website dating several years back was no longer offering the best user experience to our NIE Number clients. Therefore, we have completely rewritten it from scratch!

The main improvements are:

We hope that you enjoy using our new site, and that it will encourage you to apply for your NIE Number through us!
This entry was posted on 3rd of November 2014

The Spanish Ministerio del Interior have updated the form used to apply for a NIE Number. The new NIE Number application form is essentially very similar to the one used previously, but it includes an additional field in which you have to grant permission to the authorities to access the Sistema de Verificación de Datos de Identidad y Residencia (SVDRI). 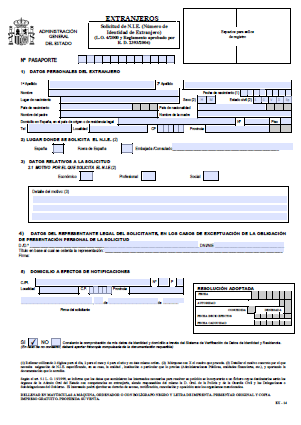 The SVDRI is a system which can be used by the authorities to check whether a person is a resident or non resident, and access other personal information which has been previously put into the system, such as an empadronamiento address, therefore reducing the need for printed certificates. We are still not sure how this affects the NIE applications, as traditionally no printed certificates have been requested by the authorities.

Those who don't mind going through the hassle and waste of precious time and money which involves applying in person, can use the following form.

A few days ago we were informed at the police station that an internal letter has been distributed which states that, from now on, when applying for a NIE number, British citizens must provide a legalized copy of the passport cover along with the page in which the personal details are shown. We were rather curious on why such a requirement was being imposed, as a passport cover provides, at first sight, little or no information. After doing some research we have discovered the reason: the authorities want to know whether the applicant is a citizen of Jersey, Guernsey or Isle of Man. Apparently, these Crown dependencies issue a passport which is very similar to the one issued at the United Kingdom, except for the fact the words "European Union" are not present on the cover.

Later, we've learnt that instead of the cover, the authorities prefer to have a copy of the first page, which together with the information shown on the cover, it also provides the passport number. 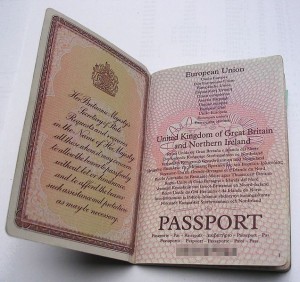 As mentioned on the FAQ, the NIE application requirements for EU and non-EU citizens are different. The latter are required to provide some proof on the reasons why they are requesting the NIE number (a private purchase contract, a rental contract, etc).
This entry was posted on 19th of March 2009